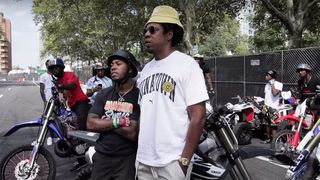 The eighth annual Made in America Festival took over the Benjamin Franklin Parkway in Philadelphia over Labor Day Weekend, serving as a celebration of all things hip-hop in the United States. We were on the ground to take in all of the festivities that the weekend had to offer, and not only did we enjoy some high-energy performances, but we also had the opportunity to speak with a number of artists and industry insiders.

In the clip you will hear from hip-hop artists such as Melii, reputable journalists, and various other influential figures as they discuss hip-hop culture in America, as well as the current social and political state of the country.

Curated by JAY-Z, Made in American 2019 boasted performances by the likes of Travis Scott, Cardi B, Gucci Mane, Lil Uzi Vert, Megan Thee Stallion, Lizzo, Tierra Whack, Rosalía, and numerous others. Press play above to get a feel for what went down during this year’s festival.

The MR PORTER Winter Sale Sees Needles, AMBUSH & More at Up to Half Price
SelectssponsoredDecember 26, 2019