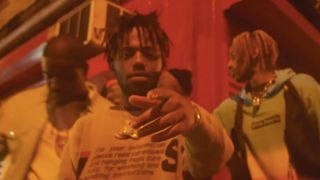 MadeinTYO this week shares the official music video for his recent collaboration with A$AP Ferg, “Ned Flanders.” Since its release in June, the song has accrued over 25 million streams.

In the Lonewolf-directed aesthetic, we see MadeinTYO and Ferg hitting the barbershop for a fresh cut before a night out in Chinatown.

“We wanted to have a theme that matched the production of the song so we were thinking like downtown New York. We were walking around Chinatown and saw this barber shop so I paid the guy to use his shop and paid him extra to be in the video,” says Lonewolf. “Working with Tokyo is always all love. He has always rocked with me so it’s always love. Ferg was great too, he trusted my vision and everything was easy.”

Already having two top 10 radio records under his belt, MadeinTYO is currently working on a new album.

Next up, hear Chance the Rapper, Joey Purp, and KAMI connect on “Reboot.”