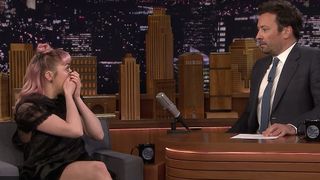 Game of Thrones star Maisie Williams shocked Jimmy Fallon and his audience last night, appearing to accidentally let slip that her character Arya Stark would die in the second episode of the show’s final season.

On The Tonight Show, Fallon pressed Williams about any small details she could reveal about the eighth and final season of Game of Thrones. Williams was initially unyielding, telling the late-night host that HBO is incredibly strict about spoilers before letting slip that she was surprised that Arya would die early on in the new season.

Both Fallon and Williams look terrified as they take stock of her supposedly accidental revelation. Williams asks, “Is this live? Can we edited it out?” and they attempt to take the segment from the top. Williams appears so upset that she exits the stage before coming back on to shout “April Fools!” with Fallon.

Game of Thrones season eight premieres on HBO on April 14.