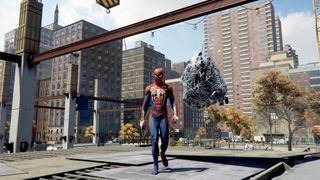 After dropping a hype gameplay trailer yesterday, fans get another look at the highly anticipated Spider-Man PS4 game centered around open-world.

Titled, ‘Just the Facts: Marvel’s New York’, we get a closer look at how Spider-Man traverses New York City. From swan diving off of the Empire State to running alongside buildings to swinging over rooftops. Many real-world landmarks are shown off in the trailer including the Radio City Music Hall and a riff on MoMA called the Manhattan Museum of Contemporary Art (MMoCA). Marvel fans also get glimpses of comic book landmarks as well like Sanctum Sanctorum, the famous residence of Doctor Strange, and the Avengers Tower.

The trailer shows off some of the side quests and collectibles spread throughout the city. We get a look at finding Peter Parker’s old backpacks scattered across the city, tracking down Oscorp research stations, and eliminating gang hideouts.

If you weren’t hyped already for Marvel’s Spiderman, this trailer proves that the games open-world isn’t just beautiful, but jam-packed with content for us to explore, find, and travel to. The PS4 exclusive arrives September 7. Will you be picking it up?

For more on ‘Marvel’s Spiderman’, check out the new gameplay trailer.

Marvel Fans Are Pissed at Sony for Cutting Tom Holland’s Spider-Man From the MCU
MoviessponsoredAugust 21, 2019