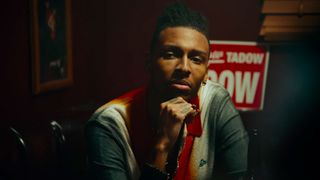 To celebrate the two-year anniversary of their viral one-take music video for “Tadow,” Masego and FKJ drop an official video for the jazzy bop. Since its release, “Tadow” has accumulated over 130 million views on YouTube, and over one million streams a week for the last 18 weeks. The Joe Weil-directed visual aims to continue the single’s success.

The video opens with Masego cruising down the streets of Los Angeles, which slowly builds into a budding love story. Subtly, the video takes place in a parallel universe where every billboard, Uno card, and word is replaced with “tadow.” There’s also nods to recent pop culture moments including celebrating the first time Miss America, Miss USA, and Miss Teen USA are all women of color.

Watch the official music video for “Tadow” above.

For more on Masego, watch him serve up “trap house jazz” realness on ‘Cued Up’.