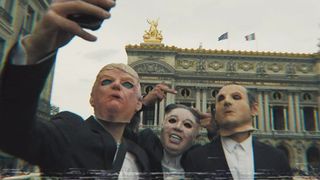 Every generation finds new ways to satirize its leaders, and new skate video MASK OFF $ opens in a movie theater with an iconic scene from 1940 movie The Great Dictator, in which Charlie Chaplin parodied Adolf Hitler.

The four audience members (skaters Adrien Bulard, Victor Manuel, Victor Campillo and La Toins) are wearing masks representing four of the world’s most powerful leaders: US President Donald Trump, Russian President Vladimir Putin, French President Emmanuel Macron, and Kim Jong-Un, Supreme Leader of North Korea. Watch above to see what happens when some of the most powerful world leaders go wild on the streets of Paris.

Directors Jonayd Cherifi, Etienne Declerck, and Tristan Helias came up with the idea for a skate film featuring the four leaders while watching a Macron speech. They wanted to take these global leaders out of their political context and place them on the streets.

The frenetic video, set to the track “Cheap Beer” by LA punks FIDLAR, follows the four leaders as they skate through the French capital. Although the leaders cause plenty of disruption in front of Paris’ iconic landmarks, the film doesn’t offer any specific political message, leaving the audience to draw their own conclusions.

Elon Musk Reveals Tesla Cars Could Be Talking to Us Soon
DesignsponsoredJanuary 12, 2020
What To Read Next
Load More
Search Results
Load More