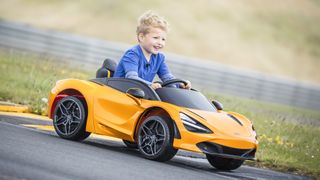 Have your kids riding in style with the all new McLaren 720S Ride-On. As authentic as the multiple award winning adult 720S model, the younger generation will now be able to experience the thrill of driving a supercar for themselves.

The car is powered by an electric motor operated by a working accelerator pedal with added engine sounds, because who doesn’t love a good rev up! The “engine” operates with a key, but it can also be controlled by remote control to provide a degree of automotive autonomy, as well as parental control. A brake function – with brake light – and a dashboard display screen that gives key information. The screen also houses the infotainment system, with buttons for different functions on the dashboard including movie watching and playing music via a USB or SD card. A selection of popular songs for six-year-olds is pre-loaded into the system.

If you want your kid to be the king of the playground, grab the new McLaren 720S Ride-On priced at $400. Just like any McLaren, this ride is expected to be in high demand. Take a closer look at the car in the video above.