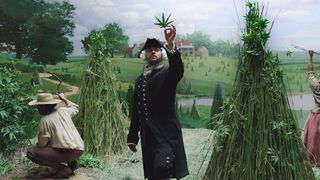 MedMen makes history today by debuting the first-ever consumer cannabis commercial, after being rejected by select cable networks to which it was submitted. Titled The New Normal, the commercial-meets-short film stars actor/activist Jesse Williams and is directed by Academy Award-winning storyteller Spike Jonze.

The New Normal delves into the American history of cannabis, from pre-prohibition to today’s modern industry, ultimately serving to further support MedMen’s vision for marijuana legalization and regulation. The piece reverts back to pivotal moments throughout American history, such as George Washington’s hemp farm and Reefer Madness propaganda, detailing coinciding injustices of the past while looking towards a hopeful future.

Jesse Williams co-wrote The New Normal with Spike Jonze, as the majority of the project’s cast and crew have a personal connection to the plant. Such participants include military veterans who use cannabis to treat PTSD, a former NFL player who uses it as a substitute for opioids, victims of racial profiling and others who work in the burgeoning industry.

MedMen is launching a 360-degree The New Normal campaign, with spots on connected TV networks, print and radio ads,, and podcasts, in addition to advertisements in hundreds of movie theaters in California, Nevada and Michigan. Furthermore, Spike Jonze is working with filmmaker Molly Schio on a short documentary exploring the themes of The New Normal in further detail.

Visit MedMen for more on The New Normal and the history of cannabis.

Also, be sure to check out our High End documentary where we explore the rise of the luxury weed market.

Dark Clouds: What You Need to Know About Counterfeit Cannabis
LifesponsoredSeptember 27, 2019