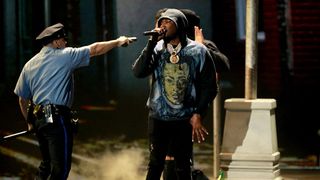 The 2018 BET Awards went down on Sunday night, and Meek Mill’s performance was definitely a highlight. Since being released from prison two months ago, he’s been speaking up about justice reform, and even has an Amazon series in the works about the criminal justice system. Taking a break from his advocacy work, he took to the stage for a powerful performance at the BET Awards.

The full stage set depicted the streets of Mill’s native Philadelphia, and provided powerful commentary on police brutality. Joined by none other than Miguel, he debuted a brand new song called “Stay Woke.”