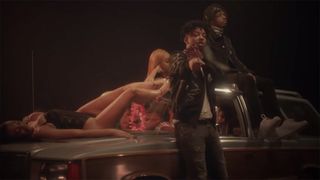 Late last year Metro Boomin delivered his star-studded Not All Heroes Wear Capes album, featuring the likes of Drake, Travis Scott, Gucci Mane, Young Thug, Swae Lee, Offset, Kodak Black and Gunna, among others. Appearing multiple times on the LP, 21 Savage stands out above the rest, as the project truly reaches its potential whenever Metro and 21 link up.

Subsequently, Metro Boomin now shares a video in support of one of his Not All Heroes Wear Capes tracks with 21 Savage, “10 Freaky Girls.” Directed by Zac Facts, the clip sees the pair of artists surrounded by a bevy of women, as 21 performs the song.

Press play above to check it out, and after, you can revisit Not All Heroes Wear Capes underneath.

For more music videos, see Future orbit in his own galaxy in “Rocket Ship.”