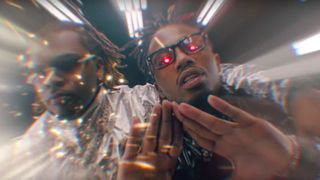 Metro Boomin performed his Not All Heroes Wears Capes hit “Space Cadet” with Georgia rapper Gunna on The Tonight Show in February. The duo are back it again, this time with the unveiling of the song’s official visual.

The Zac Facts-directed clip boasts an MIB-like theme as it kicks off with a group of secret investigators staring at a vintage automobile that features both Metro Boomin and Gunna sprawled across its body.

Both rappers are perceived to be aliens as the video suggests, and they are eventually interrogated. The clip then pans to a retro-futuristic early 2000’s aesthetic with the usage of various camera angles and lighting. Towards the end, a woman in protective gear tries to come to their aid, however, both are eventually lured up into the sky to conclude the trippy experience.

In other news, we sat down with the founders of Sherbinskis, a premium cannabis lifestyle brand. Check below.