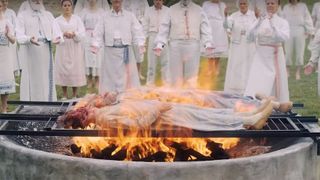 A24 celebrates summer solstice by releasing a new trailer for Ari Aster’s much-anticipated Hereditary followup, Midsommar. The latest glimpse at the film showcases the festivities we can look forward to in the movie, as a group of friends find themselves welcomed into a cult community during their travels to Sweden.

On the longest day of the year, let the countdown to #MIDSOMMAR begin — In Theaters July 3 #HappyMidsummer pic.twitter.com/LRVxilyDoB

Midsommar centers around a couple played by Jack Reynor and Florence Pugh, who take a vacation to Sweden to visit the rural hometown of one of their friends and the summer festival its known for. While the setting is beautiful and the greeting is warm, things quickly take a turn as the group eventually learns they’re surrounded by a pagan cult.

Will Poulter, William Jackson Harper, Ellora Torchia, Archie Madekwe, and Vilhem Blomgren also feature in the movie, which lands in theaters July 3. After watching the latest Midsommar promo above, you can see previous trailers underneath.

A24 Takes You Inside the War in Afghanistan in ‘The Kill Team’
MoviessponsoredAugust 14, 2019

Netflix Takes on ‘A Quiet Place’ With New Cult Thriller ‘The Silence’
MoviessponsoredMarch 29, 2019