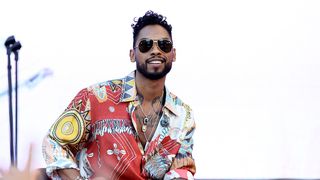 Prior to heading out on tour later this month, Miguel is back with a new song, titled “Vote.” Produced by Mark Ronson and Hudson Mohawke, the funky jam is slated to appear on the Crazy Rich Asians soundtrack, as the film lands in theaters this week.

me @miguel and @hudmo made a new very feel good song called "Vote" for the excellent hilarious feel good film "Crazy Rich Asians". check it out and see the FILM! https://t.co/kCXTvZ8cfP

Recently, Miguel was featured on RL Grime’s new album, NOVA, the Superfly soundtrack, and GoldLink’s “Got Friends.” Again, you can catch the crooner on his ‘Ascension’ tour beginning August 23.

For more music, listen to Stefflon Don and Future’s “What You Want.”