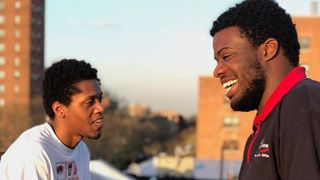 New York rapper MIKE has released a new full-length album titled Renaissance Man on SoundCloud and Bandcamp via Lex Records. The body of work included on this project was executive produced by Darryl Johnson and features artists like Red Lee, Fleece Files, Adé Hakim and more. MIKE’s material often touches on his experience as a young and black man living between continents and the depression and anxiety that often comes along with that reality.

This marks the rapper’s third release of 2018 following resistance man and Black Soap. In addition to dropping Renaissance Man, MIKE also unveiled a music video for the track “resistant man.” The entire LP will be available on streaming platforms starting June 29. Peep the full tracklist and listen to Renaissance Man below.

In other music news, Playboi Carti and DP Beats dropped a new single called “Check.” Listen to it right here.

FRONTPAGE
Self-Isolation Has Given Birth to a Beautiful Runnaissance
SneakerssponsoredApril 8, 2020