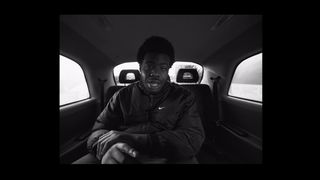 Lo-fi rapper MIKE has just released a video for his song “Rottweiler.”

The black-and-white video, directed by Matter Research, has an old-school vibe thanks to the square format. It follows MIKE rapping in the backseat of a black cab as it drives around dreary London, where the 20-year-old rapper spent a good chunk of his childhood. “Rottweiler” culminates with the rapper getting out of the cab to look over the city, as the shot widens and color slowly fades in while the music ends. Watch the video above.

MIKE, real name Michael Jordan Bonema, became friends with Earl Sweatshirt upon his return to the States, and is actually joining Earl on tour in April and May.

“Rottweiler” is the 5th track on War in My Pen, a 13-track mixtape released in December last year.

All the References You Might Have Missed in Eminem’s “Godzilla” Video
MusicsponsoredMarch 10, 2020

Highsnobiety Premiere
MIKEY. Is a Pop Powerhouse on “Invincible”
MusicsponsoredDecember 18, 2019