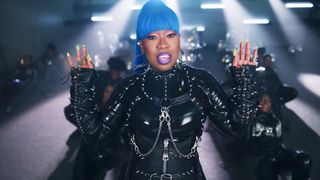 Fresh off an MTV Vanguard award at the VMAs, Missy Elliott has now released visuals for “DripDemeanor,” off her recent comeback album ICONOLOGY. Watch her new video above.

In pure Missy Elliott fashion, the visuals are super futuristic, with Missy and the dance crew rocking goth-punk outfits. Co-directed by Elliott and Atlanta-based creative Derek Blanks, “DripDemeanor” also sees a cameo from Teyana Taylor towards the end of the video.

The song was produced by long-time collaborator Timbaland and also features R&B singer Sum1 on the hook.

Watch Missy Elliott & Lizzo Turn Up the Tempo in Their New Video
MusicsponsoredJuly 27, 2019