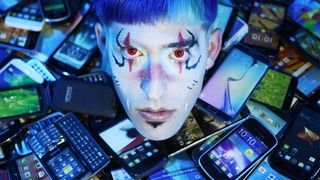 It’s Friday my dudes, which means it’s a perfect time to listen to some impeccable, iridescent-sheen future pop. Today, look no further than Mood Killer for your daily dystopian diversion. For their latest single, the nonbinary musician, who’s performed with pop queens Charli XCX and Kim Petras, took inspiration from all the cam boys, cam girls, and cam people out there to deliver an absolute bop with a sharp commentary about destigmatizing sex work and examining widespread corporate and government surveillance.

The track itself was produced by OREN (responsible for mona on the radio’s “Bright Blue Bathrobe”) along with Shane Clay. Mood Killer self-directed the incredible, hyperreal visuals, with creative production by Weston Allen and none other than the “Flamboyant” Dorian Electra.

Mood Killer says they’re trying to make music that’s emotional, cerebral, and danceable, and they definitely deliver all that and more on “Cam Boy.” Watch the video above, and stay tuned for Mood Killer’s forthcoming debut EP Liquify out on July 5th.

Highsnobiety Premiere
Berhana’s ‘HAN’ Medley Is a Whole Mood for the Weekend
MusicsponsoredMarch 12, 2020