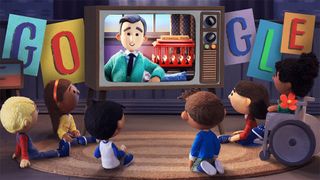 Google Doodle, which is a special, temporary alteration of Google’s logo on its homepage to commemorate holidays, achievements, and people — now celebrate the 51st anniversary of the filming of the first episode of Mister Rogers’ Neighborhood.

While the filming of the first episode occured on September 21, 1967, the show did not air nationally on PBS until February 1968. The stop-motion animation featured above was created in conjunction with Fred Rogers Productions, The Fred Rogers Center, and BixPix Entertainment, and essentially mimics the original introduction of the iconic TV show.

It begins with Mr. Rogers strolling through his neighborhood while singing his favorite song, “Won’t You Be My Neighbor?,” and along the way, he stops to bring cheer to neighborhood children in the form of friendly waves, crayon drawings, a paper crane and enjoying a ride on a trolley, then sharing his heartwarming message.

It's a beautiful day in the #GoogleDoodle neighborhood. Take a stroll through these behind-the-scenes photos from today’s stop-motion Doodle celebrating #MisterRogers. ☀️

View the nostalgic clip above, and for more, check out the documentary ‘Won’t You Be My Neighbor?,’ celebrating the life of Mr. Rogers below.

Tom Hanks Is Mister Rogers in First Trailer for ‘A Beautiful Day in the Neighborhood’
MoviessponsoredJuly 22, 2019

You Can Visit the Palace of Versailles for Free With Google’s VR Tour
DesignsponsoredOctober 1, 2019
Follow
Highsnobiety Life
What To Read Next
Load More
Search Results
Load More