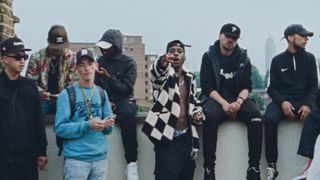 While fans patiently wait for Mura Masa’s follow-up to his 2017 self-titled album, the English producer has been working with a variety of buzzy artists. His latest collaboration is the flavorful track “Move Me” with OVO signee Octavian. Today, the 22-year-old has unveiled a Yoni Lappin-directed visual for the summertime song. The music video dives deep into Octavian’s world and celebrates the multiculturalism of his London roots. Mura Masa elaborated on the concept in conversation with The FADER.

“I think something that me and Yoni as an artist-director duo have always wanted to do is an authentic, British rap video set in London, and when this track happened we knew what we had on our hands,” he said. “Yoni is amazing at taking a concept and spinning it on its head and I love how this is essentially a hood video made for Cannes. We shut down a whole street, invited Octavian’s friends down and captured the moment.”

In a press release for the single, Mura Masa explained his current process for releasing music and how he wants to create “stand-alone moments” instead of a long roll-out. “This is the first instance of letting a track be its own story and free in the world, rather than become overthought or forced into a bigger project,” he said. “‘Move Me’ came about at my studio in South London, and the first time Octavian and I actually met up to discuss music was about four weeks ago. It feels to me like a super natural collaboration, and I love what we’ve managed to do working together. In the time between now and the next LP/art project, I’d love to find more moments like this and put them onto the scene. That feels like the future to me.”

There’s no telling when the producer will put out another project, but all of these singles should hold you over. In the meantime, sit back, relax and kick it in Octavian’s hood through the video above.

In other news, Kanye West is reportedly producing an EP for Bump J & Sly Polaroid. Get all the details right here.