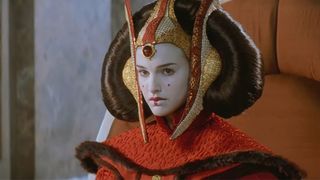 Golden Globe and Academy Award-winning actress Natalie Portman graces the front cover of Vanity Fair‘s December issue, and in a special segment she discusses her remarkable career in a ten-minute clip above.

From her film debut with 1994’s The Professional, to Mars Attacks, to be being cast as Queen Amidala in the Star Wars franchise, the esteemed actress/producer talks about the different roles she had played throughout her successful career spanning various genres, as she wishes “there was some grand design” for her success, but expressed that she’s been “very instinctive” and goes by what she “feel’s right.. at the moment and also what’s available.”

@NataliePortman has been a star nearly all her life, but now she's speaking new truths about her industry—and herself. For V.F.’s December cover, the #VoxLux actress shares them with @DurgaPolashi. Photograph by @ErikMadiganHeck. Styled by @SamiraNasr.

Her parts in other films like Garden State, V for Vendetta, Closer, A Tale of Love and Darkness, Black Swan, Jackie, and the upcoming drama, Vox Lux, where she portrays a struggling pop star, due out stateside on December 7, are dissected in the clip as well. Enjoy the video above and you can check out the official trailer of Vox Lux below.

In other movie news, watch the final trailer for the new Queen biopic ‘Bohemian Rhapsody.’

The 10 Biggest LEGO Sets of All Time
DesignsponsoredApril 12, 2020

Here Are All the Best Video Games Out in November
Video GamessponsoredNovember 1, 2019
What To Read Next
Load More
Search Results
Load More