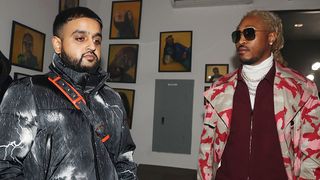 Just days after releasing his sophomore album, NAV returns to deliver the deluxe edition of Bad Habits. While the new version boasts multiple previously-unreleased tracks, the standout is a collaboration with Future.

“This record a special one for me I had to let it have its own moment,” NAV said on social media. “@future one of my favorite artists and been a big bro/mentor to me.”

This record a special one for me I had to let it have its own moment. @future one of my favorite artists and been a big bro/mentor to me. I’m dropping this Tomorrow night on all platforms! ??

They wouldn’t let my brother @liluzivert voice be heard on habits so I made sure his words were still on the song at least. BAD HABITS DELUXE OUT NOW LINK IN BIO

Press play above to listen to NAV and Future on “Amazing,” then see underneath for the entire deluxe edition of Bad Habits.