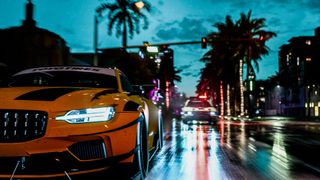 Developer Ghost Games has unveiled the next installment of its racing game series, Need for Speed Heat. Taking place in Miami, the trailer gives us serious Vice City meets 2 Fast 2 Furious vibes as we see a legion of super cars racing through Magic City.

The stylish trailer shows off gorgeous graphics as neons lights bounce off of rain-soaked streets as well as familiar police chases and deep car customization. In a press release, Riley Cooper, Creative Director at Ghost Games stated that “fans have been clear that they want more cars, more customization, and more challenges, and we’re tuning up on every aspect.”

A story also seems to be a focal point in Heat. The trailer highlights a rebellious group of racers, fronted by a woman presumably. “They impose limits to control us,” she says. “Limits to make us blend in. Make us safe. But we own the limits, and we’ll own the night.”

Need for Speed Heat will launch on Xbox One, PS4, and PC on November 8. A worldwide gameplay premiere will be revealed next week on August 19 at Gamescom. Watch the full trailer above.