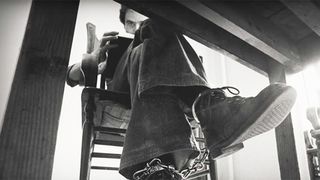 Netflix‘s latest true crime documentary invites you into the dark mind of one of the United States’ most notorious serial killers, Ted Bundy. Check out the trailer above.

Conversations With a Killer: The Ted Bundy Tapes exposes Bundy’s psyche in the killer’s own words via a series of never-before-heard interview recordings made while on death row in 1980. Bundy confessed to the murder of 36 young women in several states during the ’70s, although his total number of victims is believed to be as many as 100 or more.

“I’m not an animal, I’m not crazy, I don’t have a split personality,” he says in one recording. “I mean, I’m just a normal individual.”

While focusing on his chilling crimes, the series also looks into how Bundy didn’t fit the expected personality type of a serial killer. “He was charming, good-looking, smart. Are you sure you got the right guy?” one woman queries in a voiceover.

Conversations With a Killer: The Ted Bundy Tapes lands on Netflix on January 24 and is directed by Paradise Lost documentarian Joe Berlinger.

In other news, HBO has dropped the first real ‘Game of Thrones’ trailer.

Here’s Everything Coming to & Leaving Netflix This May
MoviessponsoredApril 25, 2019