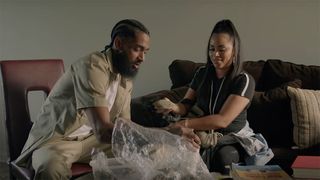 Nipsey Hussle is back in support of his debut studio album, Victory Lap, sharing the official music video for one of the bonus tracks from the LP, “Double Up.” With appearances from song collaborators Belly and Dom Kennedy, the visual stars Lauren London and features cameos from Dave East, Jay 305, and ATL‘s Jackie Long.

In the Sergio-directed film we see Nipsey transitioning from a hustler to a legit businessman. Press play above to watch the aesthetic, then see below to revisit Victory Lap featuring Kendrick Lamar, YG, Puff Daddy, Buddy, and more.

PUMA Is Reissuing Its Collab With Nipsey Hussle’s The Marathon Clothing
StylesponsoredJanuary 24, 2020