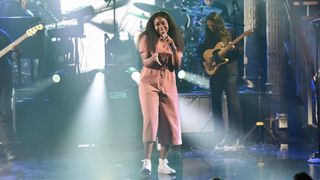 Following the announcement of replacing the cover art of her Room 25 album in light of domestic abuse charges brought against the cover artist, Noname made her solo TV debut on Wednesday as the featured musical guest on the Late Show with Stephen Colbert.

Last night was literally a movie. Thank you @stephenathome for having me ?

In support of her new album Room 25, the Chicago rapper performed a three-song medley that included hit singles “Blaxploitation,” “Prayer Song,” and “Don’t Forget About Me.” The talented artist delivered adjusted renditions of all three songs, as she was backed by a live band and vocalists.

You can watch a replay of the performance above, and listen to Room 25 in its entirety via SoundCloud below, as Noname embraces the magic of black womanhood.

Up next, view Noname’s ‘Room 25’ tour dates here, which kicks off in January.

Watch Bad Bunny Perform ‘Pero Ya No’ in a Giant Pokémon Onesie
MusicsponsoredMarch 4, 2020