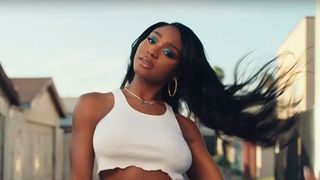 Normani just made her case for why she’s the next big pop-star — in a big way. On Thursday night, the Fifth Harmony alum dropped the video for her debut solo single “Motivation” and it’s straight fire. Paying tribute to iconic 2000s videos and showcasing Normani’s crazy acrobatic, hip-popping dance moves, the “Motivation” video will dispel any doubts about the strength of her star power. Watch it above.

The video begins with a young Normani watching BET’s countdown video show 106 & Park. Dreams come to fruition when the scene cuts to Normani recreating Beyonce’s “Crazy in Love” video. The silky-smooth track co-written by Ariana Grande is all about enticing a paramour. Needless to say, Normani’s head-spinning choreography surely gets the job done. An homage to turn-of-the-millennium dance clips by the likes of Destiny’s Child, J. Lo, Ciara and Britney Spears, Normani shows us that she’s next in line for the pop-star throne.

Since its drop, “Motivation” has fans and celebrities alike freaking out, with an unending outpouring of love and frankly obsessive stanning.  Check out some of the best reactions below.

When celebrities turn into fans

it’s almost six am where i am rn and my cheeks hurt from smiling, refreshing, watching a million times. enjoy this special moment. my heart is so full for u !!!!!! ?? https://t.co/e2xUB35ibw

sooo proud to be a woman rn. we doing the damn thing ????

Did normani just do a double pirouette, hit the ball w her knee and then BOOTY POP THE BALL OUT THE WAY!? art. pic.twitter.com/CeTyEJmLrS

Did I just create the #motivationchallenge? #normani #motivation @Normani pic.twitter.com/2cHyahfsIA

And some people took it too far

i didn’t know it was possible but after watching normani’s new music video motivation i’ve discovered that i’m pregnant and she is the father pic.twitter.com/Y25KRkg1hr

This photo just got me pregnant. #Motivation #Normani pic.twitter.com/lcDseoeHYh

More People Are Playing ‘The Witcher 3’ Now Than When It Launched in 2015 Thank to Netflix
MoviessponsoredDecember 30, 2019
Follow
Highsnobiety Music
What To Read Next
Load More
Search Results
Load More