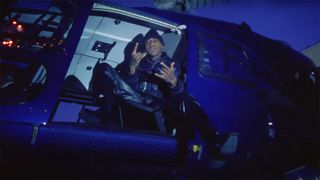 Rising French-British rapper Octavian is back this week in support of his recently-released mixtape, Endorphins, which arrived less than a month ago, sharing the official music video for project track, “No Weakness.” The visual follows Octavian’s previous Endorphins aesthetic for “Feel It” featuring Theophilius London.

Directed by Sacha Barbin, Octavian’s “No Weakness” video finds the 23-year-old musician hovering over Paris in a helicopter and battling his demons while at a psychedelic party. Press play above to watch the clip.

Octavian’s Endorphins mixtape, which dropped on June 13, was recorded between London and Los Angeles. The 12-track project features guest appearances from Skepta, A$AP Ferg, Smokepurpp, Theophilus London, ABRA, Jessie Ware, and more. You can revisit the tape below, then see underneath for a list of Octavian’s upcoming shows, including a number of summer festivals across Europe like Sonar, Way Out West, and Reading and Leeds Festivals.