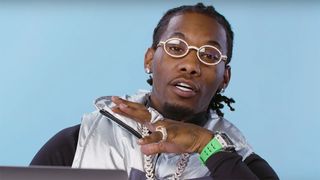 Earlier today Offset released his anticipated debut studio album, Father of 4. Continuing his promotional rounds in support of the project, the Migos member has gotten together with GQ to take part in their Actually Me series.

The episode finds Offset going undercover on the internet to respond to various comments from fans. While checking Instagram, Twitter, YouTube and Reddit, among other platforms, Offset dishes on his relationship with Cardi B, why they named their daughter Kulture, and how Migos came up with their name. You’ll also witness the 27-year-old rapper riding hard for his hip-hop trio, all while putting on for Atlanta.

Press play above to watch Offset respond to social media comments, then be sure to check out his debut album below.