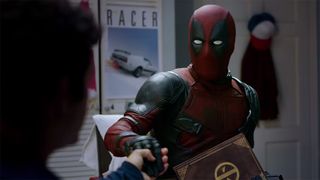 Fox’s PG-13 Deadpool movie, Once Upon a Deadpool, is slated to hit theaters this week, and today we get another look at what to expect from the holiday-specific film. While little/if any new footage is shown in the teaser, we do witness a rather humorous conversation between Ryan Reynold’s Deadpool and Fred Savage.

After Savage makes a backhanded comment about oft-criticized band Nickelback, Deadpool comes to their aid, defending the group by stating their accolades. At the end of the teaser, we’re then blessed with a musical performance by Pool and Savage as they sing Nickelback’s “How You Remind Me” in unison.

Once Upon a Deadpool, a Christmas edit of Deadpool 2, comes to theaters December 12. The film features recut footage from the original movie.

‘Once Upon a Time in Hollywood’ Is Returning to Cinemas With 4 Deleted Scenes
MoviessponsoredOctober 25, 2019

Kareem Abdul-Jabbar Says Tarantino “Disrespects” Bruce Lee in ‘Once Upon a Time in Hollywood’
MoviessponsoredAugust 17, 2019

Here Are All the Winners From Last Night’s Historic 2020 Golden Globes
MoviessponsoredJanuary 6, 2020
What To Read Next
Load More
Search Results
Load More