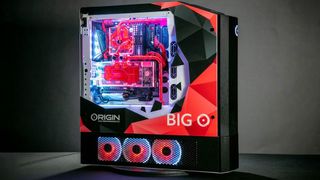 To celebrate Origin PC’s 10th anniversary, the boutique builder has integrated the Xbox One X, PS4 Pro, a high-end PC, and a Nintendo Switch into the ultimate gaming machine. Take a look at the “Big O 2.0” unboxing above.

The water-cooled build features a powerful Intel Core i9-9900K, 64GB of RAM, 4 TB of SSD storage and an Nvidia Titan RTX graphics card. As you can see in the unboxing, the new Big 0 also has built-in HDMI switches so you won’t have to change the monitor’s HDMI channel.

According to TweakTown, Origin PC won’t be selling them any time soon because it’s unlikely the major gaming companies will ever be on board with integrating their technology into one machine. We can hope, though!

Here Are All the Best Video Games Out in May
LifestylesponsoredMay 10, 2019

A Nintendo Switch Pro With 4K Gaming Could Arrive in 2020
DesignsponsoredJanuary 3, 2020

A Modder Made the Gamecube Joy-Cons We Wish Existed
DesignsponsoredJanuary 14, 2020