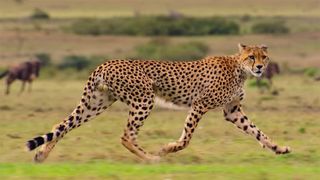 Today Netflix gives us our first look at its new nature docuseries, Our Planet, narrated by the legendary Sir David Attenborough. From exotic jungles to the deepest seas, Our Planet takes you on a journey to more than 50 countries across all seven continents.

Our Planet comes from the creative team behind the acclaimed Planet Earth and Blue Planet programs, as the eight-episode season delves into issues of conservation while spotlighting numerous animals in their natural habitat. The series was filmed entirely in Ultra High Definition.

In addition to Attenborough, Our Planet is narrated by Salma Hayek and Penélope Cruz for Spanish-language broadcasts. Hayek’s version will air in Mexico and throughout Latin America, while Cruz’s will run in Spain.

Soundtracked by a new song from Mumford & Sons called “The Wild,” you can watch the official Our Planet trailer above. The series comes to Netflix April 5.