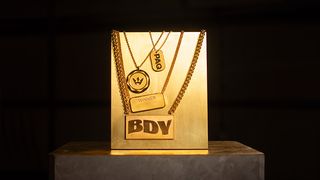 Several months ago, Highsnobiety and PAQ announced a partnership that would see them change the streetwear YouTube landscape forever. The goal was to create an awards show that would help us find the steeziest YouTuber while keeping things interactive and representative of the community: the Best Dressed YouTuber Awards.

Now the time has finally come to reveal which of the three selected contestants prevailed at the BDY Awards final.

Ultimately, the judges decided that Rickey Thompson had the waviest fit of them all, making him the inaugural Best Dressed YouTuber. A huge thanks to all those who took part from the contestants to the judges. Congratulations Ricky, and Highsnobiety looks forward to crowning the next champ in 2019.

But first, a quick refresher about how it all went down: 15 contestants were selected to compete in the inaugural BDY Awards. These 15 nominees were split into three categories based on their YouTube subscribers (Lightweight, Middleweight, and Heavyweight). Fans could then vote for their favorite in each of the categories, with the top-voted YouTuber in each category moving on to the final.

The final saw Sangiev, Magnus Ronning, and Rickey Thompson fight it out in a ’fit battle for the ages. For more information on each of the final contestants, head here. Below you will see the outfit each contestant had selected during the challenge round.

The panel consisted of Highsnobiety’s very own Atip Wananuruks, PAQ’s Danny Lomas, Sarah Snyder, and Gully Guy Leo. To get to know our judges a little better, head here.

Finally, Highsnobiety would also like to thank PAQ for being such wonderful partners. In addition, we’d like to thank our clothing partners, BAM Berlin, OVERKILL, Voo Store, NICCE and Nike for providing us with an excellent selection of garms.

If you’re new to the BDY Awards, catch up on all the action via the videos below.

See How Seoul’s Best-Dressed Are Styling Out the Winter Season
StylesponsoredFebruary 4, 2019

How to Be the Best Dressed at Thanksgiving Dinner
SelectssponsoredNovember 24, 2019

15 Drops
The 15 Best Products to Drop This Week & Where to Buy Them
SelectssponsoredSeptember 1, 2019
Follow
Highsnobiety Style
What To Read Next
Load More
Search Results
Load More