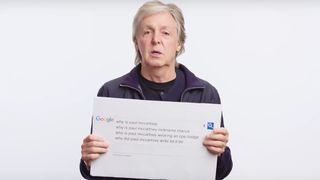 Last week Paul McCartney released his first solo album in five years, and 17th overall, Egypt Station. Subsequently, the iconic musician is currently making his rounds in promotion of the LP, having recently linked with WIRED to partake in their autocomplete interview series.

We then find the former Beatle answering the internet’s most-searched questions about himself, detailing why his nickname is “Macca,” why he wrote “Let It Be,” if the Beatles did in fact play at Woodstock, and much more.

Press play above to learn about the great Sir Paul McCartney. Following, you can stream Egypt Station underneath.

In other music news, Frank Ocean and Travis Scott are reportedly entering a legal battle over ‘Astroworld’ vocals.