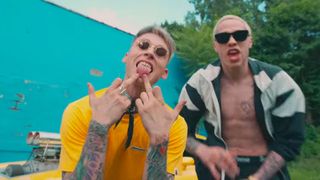 Actor/comedian Pete Davidson is seemingly everywhere these days. Following his engagement to Ariana Grande, the 24-year-old entertainer is now appearing in a rap video, thanks to Machine Gun Kelly. The aesthetic coincides with MGK’s new single, “LOCO,” as the clip was shot in Syracuse, New York.

LOCO. ⚠️🤪 out now for streaming. produced my brothers @slimxx + @bazexx — we been rockin since day 1 and this is the first official single we released that they produced. congrats!!!! y’all spazzed so crazy on this beat 😩🤑🙏🏽

“Went to Syracuse for a week to film a movie,” a statement reads to begin the visual. “Here’s the music video I shot when I wasn’t filming the video.”

For now, the Cleveland, Ohio rapper has yet to reveal where his new single will appear, but it serves as a followup to last year’s Bloom.

Nonetheless, to see Pete Davidson and Machine Gun Kelly mob alongside one another, press play above.