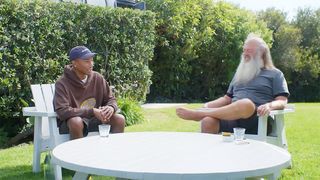 Pharrell and Rick Rubin sat down for an intimate conversation, discussing their shared love for the app Shazam, the “Blurred Lines” lawsuit, and more. Watch the full interview above.

While sitting at Shangri-La, Rubin’s Malibu recording studio, Pharrell opened up about the controversial “Blurred Lines” lawsuit. Around the 28:00 mark, Pharrell admits that he was really hurt by how things played out and how he felt that the song sounded nothing like Marvin Gaye’s. Rubin and Pharrell agree that, however, the “feeling” between the two songs was the same.

“You can’t copyright a feeling,” Pharrell says. He also explains that he was trying to re-create a song that moved him, without making it sound the same: “We wanted to create something that doesn’t look the same but makes you feel the same. I did that with ‘Blurred Lines’ and got myself in trouble.”

The aforementioned song — which featured T.I. and Robin Thicke — was accused of being a ripoff of Marvin Gaye’s “Got to Give It Up” by the late singer’s estate. In December of 2018, a final verdict was in favor of Gaye’s family, ordering Pharrell and Thicke to pay $5.3 million.

Pharrell May Have Perjured Himself With His “Blurred Lines” Comments
MusicsponsoredDecember 8, 2019

Pharrell Williams On “Blurred Lines” Backlash: “We Live in a Chauvinist Culture”
MusicsponsoredOctober 14, 2019

This Is Why André 3000 Won’t Be Making New Music for a While
MusicsponsoredDecember 17, 2019
Follow
Highsnobiety Music
What To Read Next
Load More
Search Results
Load More