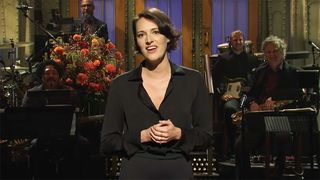 Phoebe Waller-Bridge appeared on Saturday Night Live for the first time this weekend and delivered a hilarious opening monologue that touched on Fleabag, Killing Eve, and some very weird fantasies. Watch above.

“People often assume that I am like the character Fleabag,” she said. “Sexually depraved, foul-mouthed, dangerous. And I always have to tell them: Yes.” Waller-Bridge continued, “I’m not a sex addict because I wrote Fleabag, but I did write Killing Eve because I’m a psychopath.” She then added, “And my most exciting ex-boyfriend wrote nothing, but was both.”

During her monologue she also spoke of the Priest, or rather, Hot Priest, that caused an international frenzy during Fleabag season two. The reason for “Horn Storm” around the character, she said, was down to one specific detail: Listening.

Of course, Waller-Bridge’s SNL appearance wasn’t confined to just her opening monologue — the 34-year-old British multi-hyphenate also appeared in a number of sketches. From royal family parodies to sanitary product commercials, find all her sketches from Saturday’s episode below.

What’s Wrong with This Picture?

Watch Every Imaginable ‘Game of Thrones’ Spin-Off on ‘SNL’
MoviessponsoredApril 7, 2019
What To Read Next
Load More
Search Results
Load More