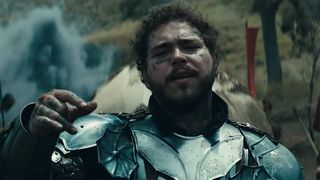 Post Malone is just days away from delivering his new album, Hollywood’s Bleeding. In continued promotion surrounding the anticipated release, today he shares the music video for featured track, “Circles,” which he dropped last week.

Post Malone stars as a knight in shining armor in the clip, as he sets out to rescue his princess who is in captivity. After searching throughout the land, he finally encounters the tower that is serving as a prison to his lady. Post makes his way up the structure by grabbing onto the princess’ hair a la the German fairytale of Rapunzel to free her.

Post Malone’s ‘Hollywood’s Bleeding’ Is Officially the Longest No. 1 Album of 2019
MusicsponsoredNovember 11, 2019