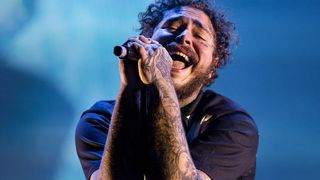 Post Malone brought out iconic Black Sabbath rocker Ozzy Osbourne for the second time to perform “Take What You Want” which appears on Posty’s Hollywood’s Bleeding album. After performing the hit as a duet on Thursday, the two appeared onstage at the 2019 AMAs alongside Travis Scott who also appears on the album track.

During Posty’s Thursday night set at the Forum in Los Angeles, Osbourne appeared visibly frail, having seriously injured himself in a fall earlier this year. He was in the hospital for months after undergoing neck surgery and was forced to postpone his 2019 world tour. He told Rolling Stone, “I was in agony beyond anything I ever experienced before in my life.”Watch it above.

It was an impressive performance nevertheless and spurred rumors that all three musicians would perform their hit together at the AMAs. Watch their flame-engulfed offering below.

Lil Nas X’s “Old Town Road” Is the Most-Streamed Song in the US Right Now
MusicsponsoredJuly 11, 2019