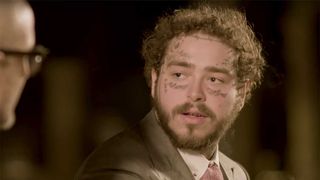 Following the release of his highly anticipated album Hollywood’s Bleeding, Post Malone joined Zane Lowe for a Beats 1 interview. In a French vineyard, Malone let Lowe in on dealing with anxiety, having a near-death experience, his plans for the future outside music and why this new record “is something super epic.” Later, Malone discussed the untimely deaths of two fellow artists who he greatly admired, Mac Miller and Lil Peep.

Speaking of his friendship with Miller, Post said “It’s so weird because I listened to him since the beginning. I was like, ‘Yeah, awesome. This guy’s cool as shit.’ Then to be able to meet him and become friends with him was just like, ‘I look up to you, and now we’re sitting here playing beer pong.'” The rapper also confirmed the rumor of a joint album, explaining that they had the idea for the project and were “coming up with names” but never managed to record it. “What an incredible, honestly, what a genuine human being,” he commented sadly of Miller.

Malone also addressed Lil Peep’s passing, noting his dislike for the unsympathetic coverage of his death, saying “You don’t know what someone is going through and you don’t know how easy it is just to get caught up in something to the point where you can’t stop. It’s not your fault. You don’t need somebody to talk down to you or say, ‘Oh, you shouldn’t do drugs.’ You need somebody to be there to give you the support that you need as a friend or a family member. I’ve been there. It’s f*cking hard.”

You can watch Post Malone’s full interview with Zane Lowe above.