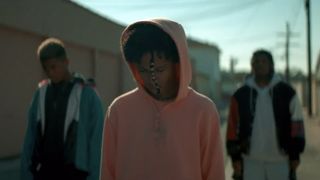 In addition to being the face of Betsey Johnson’s fall 2018 campaign, Princess Nokia has joined forces with Grammy-winning producer Timbaland and NBCU Cable Entertainment for the social impact campaign, Erase The Hate.

"Here's to the people who work every day to make the world better, stronger and great." Check out the new anthem for #EraseTheHate produced by @Timbaland and written and performed by @PrincessNokia. Join the movement: EraseTheHate.org

The official anthem video above features an original song produced by Timbaland with lyrics and vocals from Princess Nokia, as it amplifies the “Erase the Hate” mission to support and encourage a new generation taking action against hate, intolerance, and inequality.

The premiere of the visual comes at an appropriate time ahead of the one-year anniversary of the “Unite the Right” rally in Charlottesville, where white supremacists and militias rallied on August 11 – 12, which were met with counter-protestors and resulted in violence and death.

Additionally, the video will premiere across the networks of NBCU Cable Entertainment, which include USA Network, SYFY, Bravo, E!, Oxygen and Universal Kids, on August 10 beginning at 8 p.m. EST. It will continue to air in rotation throughout the weekend and will be viewable at Erase The Hate’s official website.

Timbaland expressed his support in the campaign, saying “music is the most powerful tool to cure any negativity in the world,” and Princess Nokia added, “I wanted to join this campaign more than anything…simply because I have always revolved my life, revolved my music and revolved my passion around dismantling hate.”

Next, check out the official trailer for Michael Moore’s upcoming anti-Trump documentary, ‘Fahrenheit 11/9.’

OG Nike SB Dunk Prices Have Skyrocketed Over the Past Year, According to the Stats
SneakerssponsoredOctober 16, 2019

Richardson’s Timberland Field Boot Is Made to Get You Through Winter
SneakerssponsoredDecember 12, 2019