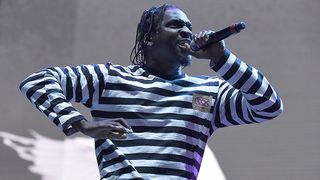 Pusha-T’s DAYTONA dropped on Friday, May 25, and we have since declared it “a satisfying snort of luxury drug raps.” In addition to Pusha’s killer bars which reignited the longstanding beef between he and Drake, its brilliance is definitely indebted to its stellar production.

According to a new video from Bandstand, executive producer Kanye West certainly dug deep for samples on Pusha’s latest record. The YouTube channel breaking down the samples of your favorite records took DAYTONA as its latest subject, uncovering samples mostly from the 1970s, from rock groups like Yes, Soul Mann & the Brothers, and more.

Check out the video above to explore the samples used on Pusha-T’s DAYTONA above, and let us know what you think in the comments below.

Listen to DAYTONA in its entirety below.

In other music news, Gorillaz are dropping a new album next month. Get the full scoop right here.

Listen to “Sociopath” From Pusha-T’s ‘DAYTONA’ Sessions Before It Gets Taken Down
MusicsponsoredApril 16, 2019