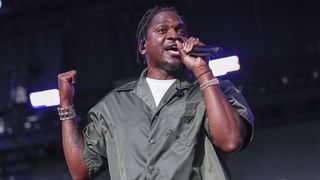 Following the release of “Sociopath,” Pusha-T is back with yet another new single this week, this time linking with none other than Ms. Lauryn Hill on “Coming Home.” Similar to “Sociopath,” the track was produced by Kanye West, as well as Mike Dean.

“Coming Home,” which initially leaked back in June, was premiered today on Apple Music’s Beats 1. While FaceTiming with Ebro Darden surrounding the song’s debut, Push discussed working with Lauryn Hill, his verse not being featured on Rick Ross’ “Maybach Music VI,” his collaboration with Kash Doll, and his activism around prison reform.

“I just made the request. She expressed that she likes my music, and she’d see about it,” Pusha said of Lauryn Hill. “I definitely followed the queen around every- Whatever it took, and it was super important to me when she showed interest. It was just super important to me to definitely have her on it. Lauryn, her discography, it means everything. It’s insane, so this wasn’t about ever rushing or being on a time limit. It was just about getting the song done right and to both of our liking.”

The 42-year-old rapper then went on to speak on “Coming Home,” stating, “This record speaks to mass incarceration. It speaks to just giving hope to those who are coming home and telling people who are locked up and behind the wall that we waiting on them, and we going to be out here as a support system when they get home.”

Press play above to stream Pusha-T and Ms. Lauryn Hill’s “Coming Home,” then see below to listen to his interview with Ebro Darden on Beats 1.

In addition to releasing a new single, Pusha-T announces a partnership with Brittany K. Barnett’s Buried Alive Project and MiAngel Cody’s The Decarceration Collective to launch the Third Strike Coming Home Campaign, aimed at freeing individuals serving life in prison due to the outdated 3 Strikes Drug Law. As Barnett and Cody search for more lawyers to join in the cause, Push has jumpstarted the campaign with a $25,000 donation. To learn more about the Third Strike Coming Home Campaign, as well as to support, follow here.