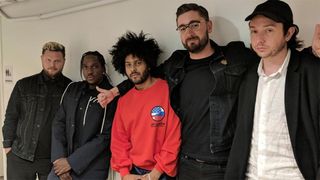 Last night alt-J took to The Late Show with Stephen Colbert to perform their single, “In Cold Blood.” This was a particularly special showcase, however, as Pusha T and Twin Shadow joined the English indie act to unleash the reworked Relaxer single to the world.

Something pretty special for you guys on @colbertlateshow tonight. Tune in to see it first.

In addition to the performance, you can now listen to the new version of “In Cold Blood” on major streaming services.

Check out the brand new @Twinshadow version of 'In Cold Blood', featuring @PUSHA_T. Out now.

The remix arrives shortly after Pusha T released his new album, DAYTONA, which you can stream below.

In other music news, here’s what went down at the ‘Nasir’ listening party.

Here’s What the 16-Year-Old Who Won $3 Million Playing ‘Fortnite’ Will Do With the Money
LifestylesponsoredJuly 29, 2019