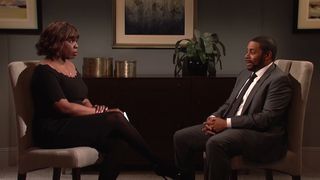 Last month, Kelly was indicted on 10 counts of aggravated criminal sexual abuse, and Kelly has been criticized for his behavior and statements since the CBS interview, while many have applauded King for her composure and ability to keep the interview from going out of hand.

In the parody clip above, Kenan Thompson portraying R. Kelly, requests to be addressed as “victim,” and mimics Kelly’s style of singing, while also referencing lyrics from the singer’s most famous songs. Particularly, when asked why he would think to do an interview, Thompson as Kelly said, “My lawyer was telling me no but my ego, my ego was telling me yes,” in a reference to R. Kelly’s 1993 hit single, “Bump N Grind.”

Also, just like the original interview, the cold open got out of control as Thompson got up and ranted the same way R. Kelly did, staring straight into the camera as a calm Jones looked on, “Guys, think for a minute. Use your brains! Why would I do these things. For 30 years, I gave y’all ‘Trapped in the Closet,’ ‘Feelin on Yo Booty,’ ‘Age Ain’t Nothing But a Number,’ and so many other clues.”

Enjoy the entire clip above.

If you or someone you know is a victim of violence, threats, or abuse at home, there are organizations you can contact for help and advice. Visit The Hotline in the US and the National Domestic Violence Helpline in the UK for more information.