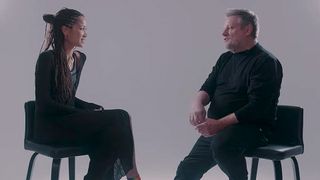 In the world of photography, few hold as much clout as Rankin, and that’s a fact currently being celebrated in a new retrospective exhibition, “Rankin: From Portraiture to Fashion,” in Milan. To mark the occasion, Highsnobiety recently sat down with the industry legend to discuss the many career highlights that have lead him to this point.

Throughout our discussion, Rankin opened up about the importance of humor and not taking one’s self too seriously. He also spoke about growing up without exposure to art and without any formal training. These circumstances meant that when he picked up a camera at 20– it was “like a blank canvas.”

For aspiring photographers, the industry veteran also offered some invaluable insights into the industry itself and spoke candidly about the responsibility one has to one’s subject.

“Rankin: From Portraiture to Fashion” is currently on show at Milan’s 29 Arts In Progress gallery. For the next four months (until February 24, 2020), the exhibition’s content will rotate to reflect Milan’s cultural calendar (Vogue’s Photo Festival in November, for example, and Fashion Week in February). Alongside the main exhibition, Rankin is also launching “ONE SHOT,” a two-day interactive project that will see the photographer taking live portraits of members of the public using the only original Polaroid Land Camera operating outside of America.