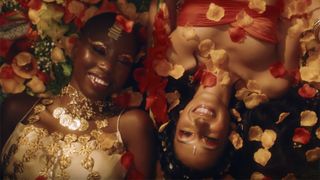 Over the past few months, Raveena has been gearing up for the long-awaited release of her debut full-length album. Today, the R&B singer gives us a sweet taste of what to expect with her warmly inviting new single “Temptation.” Raveena also shared an accompanying visual that she co-directed with Jackson Tisi which tenderly explores the fundamental nature of physical attraction and how that fits within the layers that make up our personal identities. As usual, it’s all beautifully captured from a Bollywood lens.

“I wanted to create a visual that felt like a storybook world for viewers to get lost in,” she told NPR. “Miss Temptation, played by Giannina Oteto, represents a powerful goddess that embodies many different types of lust… I wanted Miss Temptation and I’s relationship in the video to represent sexual fluidity and that pure feeling of being attracted to someone for the first time.”

Next month, Raveena will be performing at Camp Flog Gnaw. Stream her latest Everett Orr-produced track through the video above and for more of Raveena’s spellbinding tunes, check out the Shanti EP.

In other news, Asukal dropped a visual for her single “u alone.” Peep it right here.