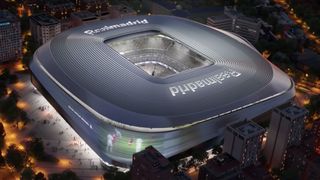 Real Madrid has revealed its plans for a new-and-improved Santiago Bernabéu stadium. The remodel will start at the end of the season.

While the 81,000 capacity will remain the same, the stadium will receive a host of modern upgrades, including a retractable roof, a new facade, a 360-degree video screen, and improved seating. Check out the redesign in the video above.

The complex surrounding the stadium itself will also receive an upgrade, including restaurants, a shopping center, and a hotel. In total, the project is expected to cost approximately $588 million USD and be completed by 2023. Club president Florentino Perez says, “It will become an avant-garde and universal icon, one of the great future projects for Real Madrid. Located in the heart of Madrid, it will be the best stadium in the world.”

Santiago Bernabéu was built in 1947, and has been the home stadium of Real Madrid ever since.

Barcelona Is the Richest Football Club in the World for the First Time
LifestylesponsoredJanuary 14, 2020