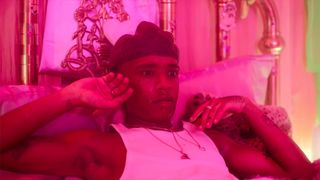 Rejjie Snow has finally released a music video for his Anna of the North-assisted single “Charlie Brown.” The track is a silky smooth cover of Republic Of Loose’s 2008 hit “The Steady Song” and serves as an homage to his Irish roots. Things get trippy AF in the Monica Gonzalez-Carter-directed visual when Snow is hilariously seduced by his girlfriend’s mother in the comfort of her overly saturated home. Sometimes, there’s a risk when you keep the family too close…

“Getting the opportunity to shoot in Mexico was really cool,” he told Complex. “I worked with the director Monica before and she told me to come out there so it was amazing to make it happen. This tune is one of my favorite Republic of Loose records so it was amazing to be able to put my twist on it. The video is weird and I’ll let it speak for itself.”

In other news, 070 Shake dropped a music video for “Mirrors.” Peep it right here.

Everything We Know So Far About Sony’s PlayStation 5
LifestylesponsoredMay 22, 2019

G-Eazy Really Wants You to Know He Has Famous Friends With New “Moana” Video
MusicsponsoredApril 30, 2020