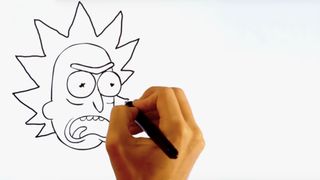 Adult Swim’s highly acclaimed sci-fi comedy Rick And Morty is slated to return with at least 70 more episodes, and a special treat for die-hard fans showcasing the do’s and don’ts of drawing characters Rick and Morty with art director Jeffrey Thompson is revealed.

In the three-minute clip above, Jeffrey Thompson explains precise rules to follow if you ever want to trace the complex characters of the Rick and Morty multiverse. A few points from the official Rick and Morty style guide are as follows: if you have already drawn a character that looks too normal, you can shift one of his, her, or even its eyes to the side to perfectly coordinate with the theme of the show; next when drawing Morty, the character’s hair should never extend past his ear, while also emphasizing that the lip to chin ratio is very important.

In addition, Morty’s body frame should be drawn equal and parallel to one another, and for Rick, the character’s head should not be circular, but instead, pill-shaped. Furthermore, you should never draw two eyebrows for Rick, but one is the “sweet spot.”

Enjoy the tutorial above, then be sure to learn how ‘Rick and Morty’ composer Ryan Elder creates the perfect cartoon soundtrack.