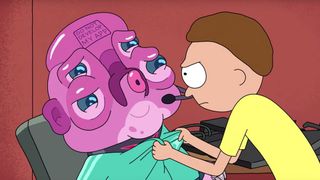 Comic-Con delivered a teaser for the forthcoming fourth season of Rick and Morty that’s almost enough to tide us over until its fall release.

As revealed in a recent Entertainment Weekly interview, Thor: Ragnarok director Taika Waititi is joining the cast. Now, thanks to the first teaser trailer, we find out in what capacity. The New Zealand actor and director voices Glootie, an inter-dimensional app developer intern who Morty and Jerry recruit to get an app deleted from the internet. Neither party seems to have much of a working understanding of how the technology works. Take a look at the clip above.

Like us, Rick and Morty writer Justin Roiland is enthusiastic about Glootie saying, “he’s a new character, and he’s fun, and we’re excited to be able to introduce him to you here at Comic-Con, because there’s all kinds of merch and stuff.”